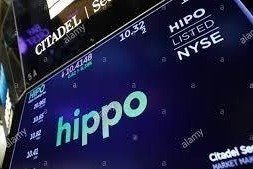 The insurtech company, which begins trading on Wall Street Tuesday, lost a third of the capital it was planned to receive from Linkedin and Zynga founders’ SPAC as investors withdrew funds

Most of the investors in the SPAC company into which Israeli-founded insurtech company Hippo is scheduled to merge with have asked for their money back. Some 83% of the capital raised by SPAC (Special Purpose Acquisition Company) Reinvent Technology Partners was withdrawn, and $192 million was returned to investors. In fact, only 19.2 million shares out of the 23 million shares issued, were sold. This means that while the public offering will go ahead and Hippo will begin trading on the New York Stock Exchange Tuesday under the symbol HIPO, the company will receive much less money than originally planned.

Under the original SPAC merger plan (an inactive company that merges with a company with real activity and turns it public), the insurtech company was expected to receive $230 million from the SPAC’s funds and another $550 million raised from institutional investors in the PIPE phase. Although Hippo will start trading at a value of $5 billion, as agreed with the SPAC entrepreneurs, it will have to make do with “only” $550 million.

Withdrawing part of the capital raised for the SPAC is a possible scenario in these mergers as the investors in the SPAC are the so-called "weak hands", who buy the SPAC shares even before the identity of the company that will be merged into it is known. To make it more attractive, investors in such a round receive two incentives. An option to sell the shares for their original $10 price, as well as an option to later acquire the public company’s shares.

In most cases, SPAC investors include hedge funds and speculative actors, who are mainly interested in the stock options rather than keeping the shares. That is why the second phase of the recruitment, the PIPE phase, includes mainly institutional bodies, or "strong hands," who are interested in the company that is merging into the SPAC. In the most recent SPAC mergers, early investors have withdrawn capital but at a much lower volume of dozens of millions of dollars. In some cases, SPAC leaders, interested in showing support for the incoming companies, announced they will invest their own money if the withdrawal will be too high.

Hippo’s case is an extreme nightmare scenario, in which the company going public actually loses a third of the money that was supposed to flow into its coffers in the IPO. The SPAC entrepreneurs did not even bother to update on the extensive withdrawal in their trading launch and merger approval announcement, and only noted that $550 million were raised. In the case of Hippo, this is a surprising scenario, given the pedigree of the SPAC entrepreneurs - Linkedin co-founder Reid Hoffman and Zynga co-founder Mark Pincus.

This is a significant event in the SPAC market, which signals both that investors believe that valuations are too high and prefer to have the options without risking their money, as well as that there is a saturation in the field. Hippo is supposed to be the seventh Israeli company to begin trading publicly through a SPAC merger, and meanwhile, the performance in the field is not particularly exciting, with most of them trading below their original share price.

The SPAC market still holds more than $100 billion that has been raised and is looking to merge with technology companies. There have been few new SPAC mergers completed recently following the US Securities and Exchange Commission’s (SEC) demand for changes in the classification of options, which made the move less profitable. Furthermore, there is a difficulty in raising additional capital in PIPE funding, due to saturation among institutional entities.

Hippo is a direct competitor of another Israeli-founder insurtech company, Lemonade, which has been traded on Wall Street since last year and is currently valued at $4.4 billion.

Hippo was founded in 2015 by Assaf Wand, who serves as CEO, and Eyal Navon, VP of Technology. Hippo is not active in the Israeli market, but several Israeli entities are invested in it, including Clal Insurance, Psagot, Bank Hapoalim and the FINTLV Fund. To date, the company has raised $700 million, with the most recent round being completed in November 2020 at a value of $1.5 billion.