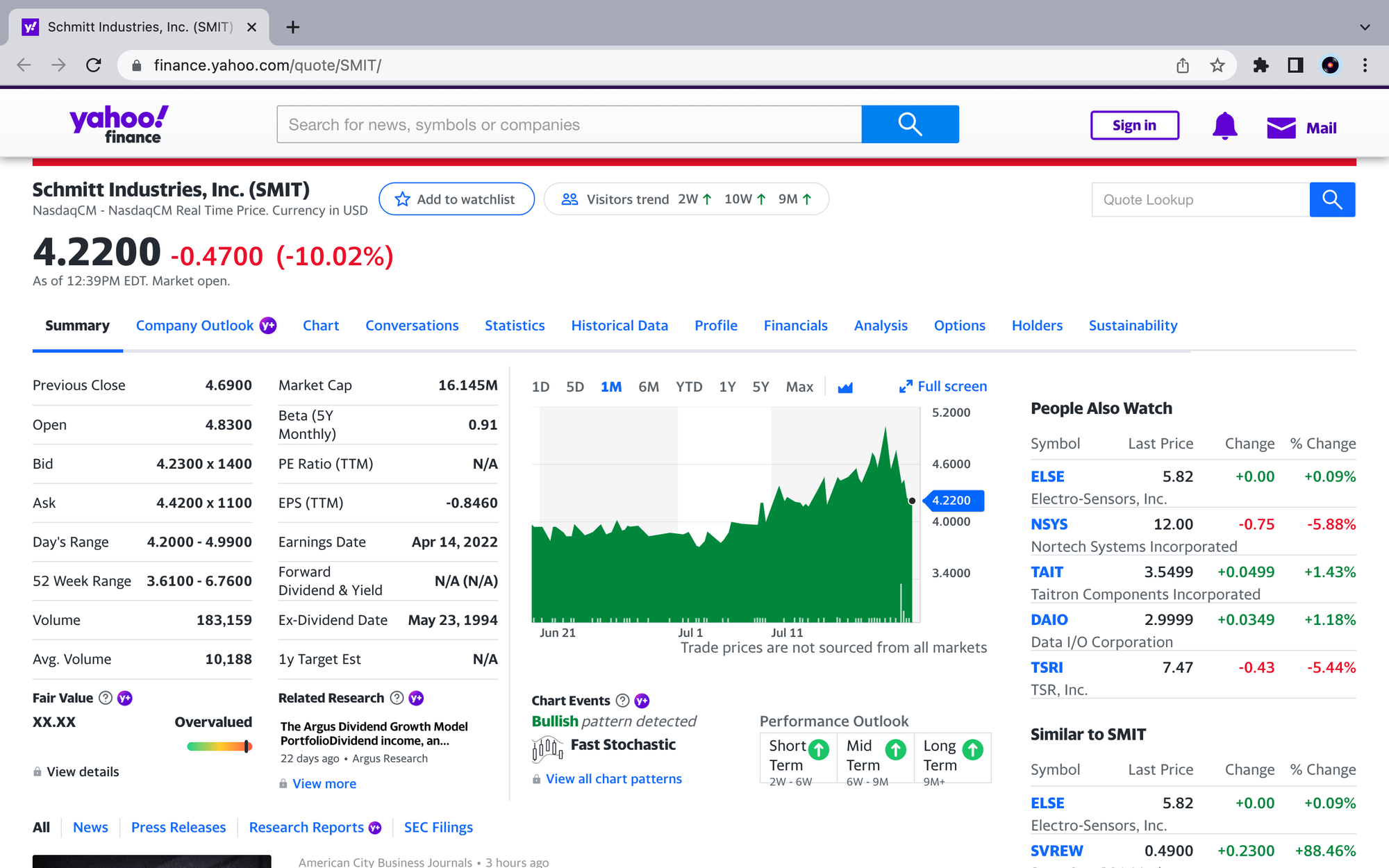 The Term Sheet contemplates the execution of a merger agreement (the "Merger Agreement") whereby the security holders of Proton Green would receive Schmitt securities in the Merger, in exchange for securities held in Proton Green. In addition, the Term Sheet contemplates the Spin-Off of Schmitt's Ample Hills business to the pre-Merger shareholders of Schmitt's common stock subsequent to the closing of the anticipated Merger (the "Closing"). The contemplated business combination would give Schmitt investors exposure to the promising helium, hydrogen and clean energy industries in which Proton Green has established footholds and operating assets, while allowing Proton Green to fund its strategic initiatives through the public capital markets.

Based on the initial valuations (without adjustment), Schmitt anticipates that the security holders of Proton Green and Schmitt would hold approximately 95% and 5%, respectively, of the combined company. Such ratio could be subject to proportional dilution for any anticipated financing in connection with the Closing, which dilution could be impacted by the Company's intent to transfer $10 million to its Ample Hills business in connection with the Spin-Off, as referenced in the following paragraph.

Completion of the Merger is subject to the negotiation of a definitive Merger Agreement and related documentation, approval of the Merger and issuance of shares related to the Merger by Schmitt's Board of Directors and shareholders, approval of the continued listing by Nasdaq of Schmitt common stock on the Nasdaq Capital Market on a post-Merger basis (which is anticipated to require raising additional financing in connection with the closing of the Merger), the completion of due diligence to the satisfaction of the parties, financing and satisfaction of other conditions that are to be negotiated as part of the Merger Agreement. Accordingly, there can be no assurance that a Merger Agreement will be entered into or that the proposed Merger will be consummated. Further, readers are cautioned that those portions of the Term Sheet that describe the proposed Merger, including the consideration to be issued therein, are non-binding and provide no guarantee that a transaction will be completed. Accordingly, there can be no assurance that Schmitt's efforts to consummate the transactions contemplated by the Term Sheet will be successful.

Assuming Schmitt and Proton Green enter into the Merger Agreement, the parties will look to seek shareholder approval from Schmitt's shareholders in the fourth calendar quarter of 2022, subject to SEC staff review of the proxy statement to be filed by Schmitt for the proposed transaction.

Proton Green, LLC, is a producer of helium and hydrogen, and is building out its position as a large carbon sequestration operator in North America. With operating control over the St. Johns Field, a 152,000 acre property in Apache Country, Arizona, Proton Green controls a helium reservoir and carbon storage basin. Helium remains in short supply and is used to cool magnets in MRI systems, as the temperate of silicon during semiconductor manufacturing, for space and satellite system applications, as well as in many other critical technologies. Carbon capture and sequestration is fast becoming a climate imperative, and Proton Green has the ability to inject up to 22 million metric tons of CO2 per year at its primary basin, and over one billion tons of total storage capacity. For more information, please see Proton Green's website at: www.protongreen.com.

Safe Harbor Statement
This document may contain forward-looking statements made pursuant to the Private Securities Litigation Reform Act of 1995. These statements are not guarantees of future performance and involve risks and uncertainties that are difficult to predict. Actual outcomes and results may differ materially from what is expressed or forecasted in such forward-looking statements due to numerous factors. A complete discussion of the risks and uncertainties that may affect Schmitt's business, including the business of its subsidiary, is included in "Risk Factors" in the Company's most recent Annual Report on Form 10-K as filed by the Company with the Securities and Exchange Commission.