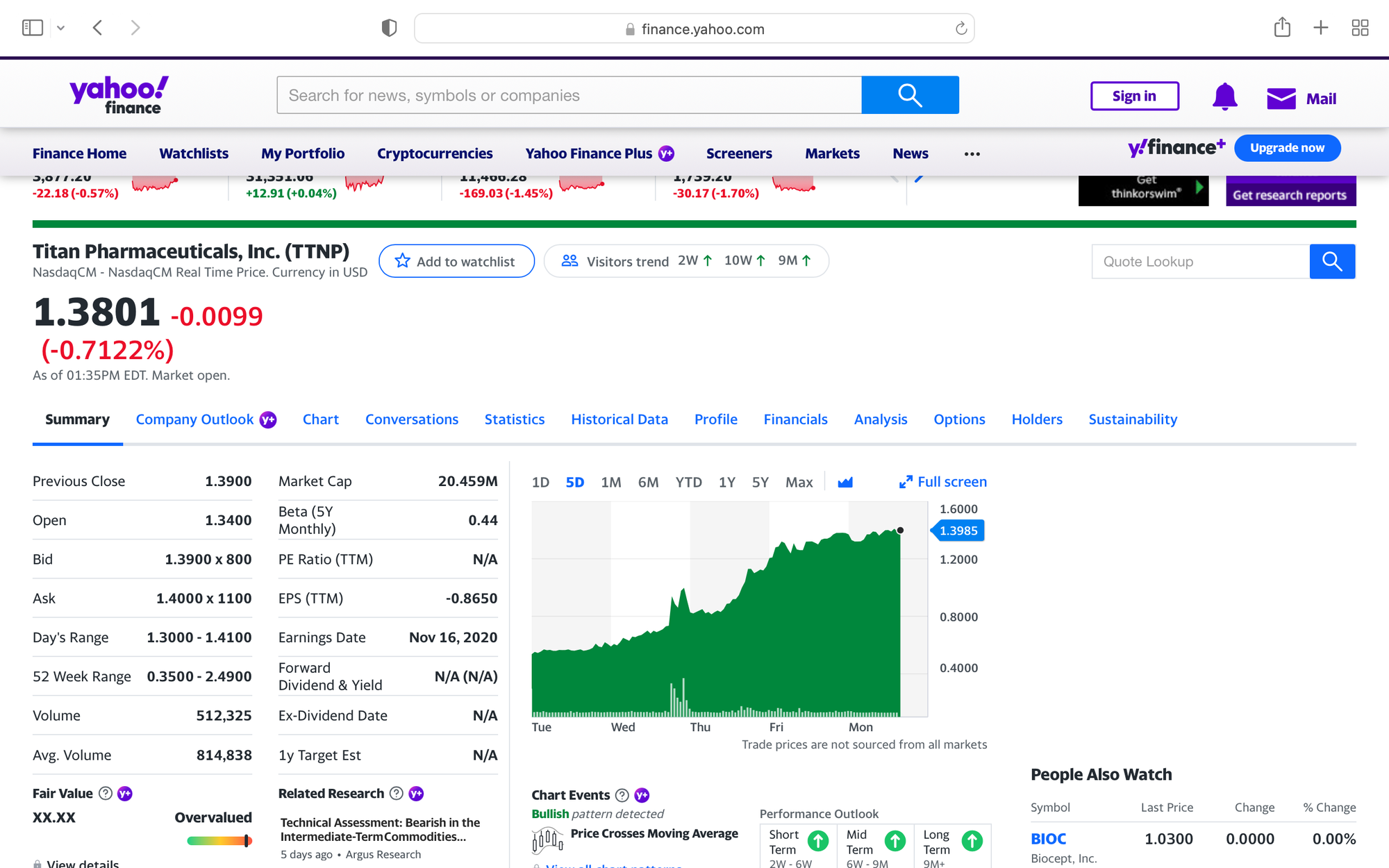 NEW YORK, July 11, 2022 (GLOBE NEWSWIRE) -- David E. Lazar, Chief Executive Officer of Activist Investing LLC (together with its affiliates, “Activist Investing” or “we”), one of the largest stockholders of Titan Pharmaceuticals, Inc. (NASDAQ: TTNP) (“Titan” or the “Company”) with 25.2% of the Company’s outstanding shares, today issued the following statement:

We have submitted a request for the Company to hold a special meeting of the Company’s stockholders (the “Special Meeting”) to expand the size of Titan’s Board of Directors (the “Board”) by six (6) directors and to elect our slate of six (6) highly qualified professionals, Avraham Ben-Tzvi, Peter L. Chasey, Eric Greenberg, David E. Lazar, Matthew C. McMurdo and David Natan (collectively, the “Nominees”), to fill the resulting Board vacancies in order to progress the Company’s previously announced review of strategic alternatives. The Nominees collectively possess decades of experience in strategic turnarounds, deal structuring, corporate governance, investment management, accounting, finance and corporate law, which we believe will be extremely additive to the Company and its ability to unlock significant stockholder value through a strategic transaction.

Biographies of Activist Investing’s nominees are included below:

We believe that Mr. Ben-Tzvi’s extensive legal experience and knowledge in the field of civil-commercial law, and in corporate and securities law, and his previous public company and commercial business experience will make him a valuable addition to the Board.

Avraham Ben-Tzvi, Adv. is the Founder of ABZ Law Office, a boutique Israeli law firm specializing in outsourced general counsel services for publicly traded as well as private companies and corporations, Investments & Securities Laws, Commercial Law & Contracts and various civil law matters, which he established in January 2017. Mr. Ben-Tzvi served as Chief Legal Officer and General Counsel of Purple Biotech Ltd. (formerly Kitov Pharma Ltd.), a clinical-stage company advancing first-in-class therapies to overcome tumor immune evasion and drug resistance, from November 2015 until April 2020. Prior to that, Mr. Ben-Tzvi served as General Counsel and secretary at Medigus Ltd., a minimally invasive endosurgical tools medical device and miniaturized imaging equipment company, from April 2014 until November 2015. Mr. Ben-Tzvi is a member of the Israel Bar Association, and is also licensed as a Notary by the Israeli Ministry of Justice. Prior to that he served as an attorney at one of Israel’s leading international law firms where, amongst other corporate and commercial work, he advised companies and underwriters on various offerings by Israeli companies listing in US and on various SEC related filings. Prior to becoming a lawyer, Mr. Ben-Tzvi worked in a number of business development, corporate finance and banking roles at companies in the financial services, lithium battery manufacturing and software development industries. Mr. Ben-Tzvi holds a B.A., magna cum laude, in Economics from Yeshiva University in New York and an LLB, magna cum laude with Honors, in from Sha'arei Mishpat College of Law in Hod HaSharon, Israel.

We believe that Mr. Chasey’s commercial law expertise, coupled with his experience leading his own law firm, will make him a valuable addition to the Board. Peter L. Chasey, Esq. serves as the Owner of Chasey Law Offices, a law practice specializing in personal litigation, business litigation and commercial law, since founding the practice in 2005. Earlier in his career, Mr. Chasey served as staff counsel for one of the largest insurance companies in the world defending general claims against insured businesses and also served as a land surveyor. Mr. Chasey holds a B.S. in Political Science and Government from the University of San Diego and a J.D. from the University of San Diego School of Law.

We believe that Mr. Greenberg’s more than 40 years’ experience in trading, developing strategies, and portfolio management and public markets experience in the microcap sector will make him a valuable addition to the Board. Eric Greenberg has over 40 years of capital markets experience. As a trader and portfolio manager at hedge funds, his areas of expertise included the development of trading strategies, portfolio management and deal structuring. Mr. Greenberg was Co-Founder of Blink Charging Co., a leader in the EV charging infrastructure industry. In addition, Mr. Greenberg provides investor relation and digital marketing services for companies across a variety of industries, such as life sciences, fintech, internet platforms and others. Mr. Greenberg holds a B.B.A in Finance from Baruch College and an M.B.A. in Finance from Baruch College Zicklin School of Business.

We believe Mr. Lazar’s position as a significant investor in the Company and his diverse knowledge of financial, legal and operations management, public company management, accounting, audit preparation, due diligence reviews and SEC regulations will make him a valuable addition to the Board. David E. Lazar has served as the Chief Executive Officer of Custodian Ventures LLC, a company which specializes in assisting distressed public companies through custodianship, since February 2018, and Activist Investing LLC, an actively managed investment fund, since March 2018. Previously, Mr. Lazar served as Managing Partner at Zenith Partners International Inc., a boutique consulting firm, from July 2012 to April 2018. In his role as Chief Executive Officer of Custodian Ventures LLC, Mr. Lazar has successfully served as a custodian to numerous public companies across a wide range of industries. Mr. Lazar currently serves as an Advisor to PROMAX Investments LLC, a position he has held since July 2022, and as an Ambassador at Large for the Arab African Council for Integration and Development, since March 2022.

We believe that Mr. McMurdo’s extensive experience in corporate and securities law and advising many public companies with federal securities law will make him a valuable addition to the Board. Matthew C. McMurdo, Esq. currently serves as Managing Member of McMurdo Law Group, LLC, a corporate and securities law practice, since 2010. Previously, Mr. McMurdo was a Partner at Nannarone & McMurdo, LLP, a boutique law firm, from 2008 to 2010. In addition, Mr. McMurdo served as General Counsel of Berkley Asset Management LLC, the general partner of a real estate fund focused on opportunistic and distressed real estate assets, from 2011 to 2013. Mr. McMurdo holds a B.S. in Finance from Lehigh University and a J.D., cum laude, from Benjamin N. Cardozo School of Law.

Activist Investing LLC (“Activist Investing”), together with the other participants named herein (collectively, “Activist”), intends to file a preliminary proxy statement and an accompanying WHITE proxy card with the Securities and Exchange Commission (“SEC”) to be used to solicit votes for the election of its slate of highly-qualified director nominees and in connection with the related proposals to be acted upon by stockholders at the upcoming special meeting of stockholders of Titan Pharmaceuticals, Inc., a Delaware corporation (the “Company”).

ACTIVIST STRONGLY ADVISES ALL STOCKHOLDERS OF THE COMPANY TO READ THE PROXY STATEMENT AND OTHER PROXY MATERIALS, INCLUDING A WHITE PROXY CARD, AS THEY BECOME AVAILABLE BECAUSE THEY WILL CONTAIN IMPORTANT INFORMATION. SUCH PROXY MATERIALS WILL BE AVAILABLE AT NO CHARGE ON THE SEC'S WEB SITE AT HTTP://WWW.SEC.GOV. IN ADDITION, THE PARTICIPANTS IN THIS PROXY SOLICITATION WILL PROVIDE COPIES OF THE PROXY STATEMENT WITHOUT CHARGE, WHEN AVAILABLE, UPON REQUEST. REQUESTS FOR COPIES SHOULD BE DIRECTED TO ACTIVIST INVESTING.